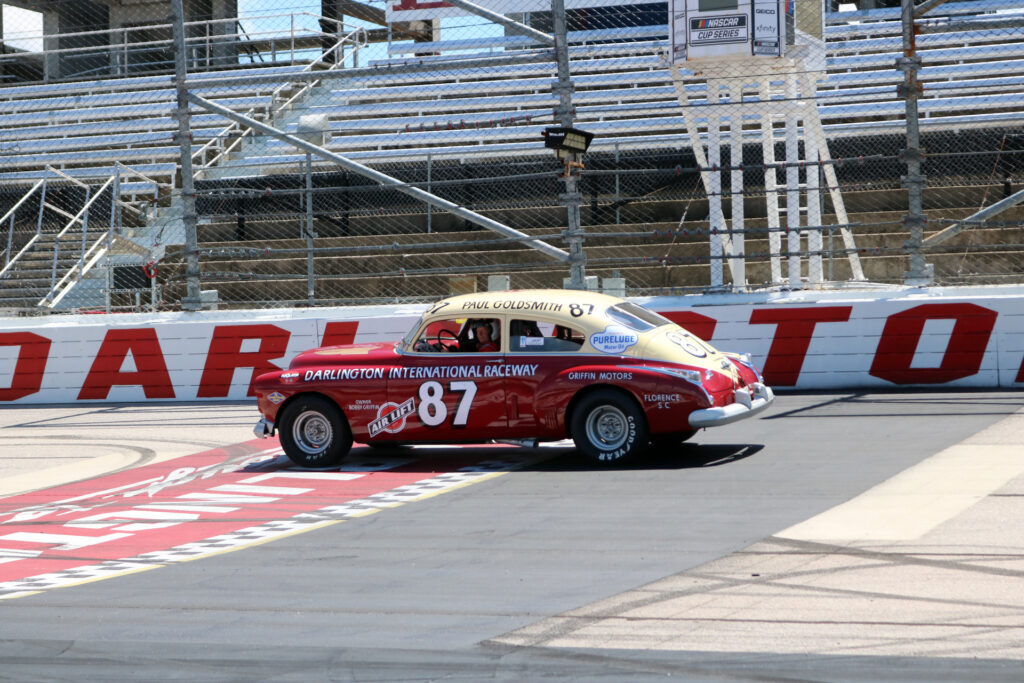 DARLINGTON, SC — Tom Baker Photos — Darlington Raceway, known as “The Lady In Black”, welcomed the STOCK CAR CLASSICS group to the facility for a day of lapping the track and raising funds for the Humane Society of Darlington County.

There were 13 cars in attendance, spanning four decades of NASCAR racing from the 50’s through the 90’s, and it was the most fun I’ve had at a race track all year.  It was my first experience with this group of enthusiasts, and as laid back and friendly as they are with each other, they are definitely hardcore when it comes to their cars.

Brinkley Whiteside is the point man for this organization, which started as a Facebook group that now exceeds 8000 members worldwide and is growing steadily.  Whiteside works in the medical field during the week but instead of playing golf, he works on his David Pearson-era Wood Brothers Ford.  Most of the others in the group also have full-time jobs, but they all just love talking about and keeping the golden era of NASCAR alive and well. The other founding members of the group include…

Joe Jackson – The No. 27 Rusty Wallace car – this car appeared in the movie Days of Thunder.

Keith Vrabec – The No. 9 Car – this car was an original racer rebuilt from the ground up.

Their goal is to have about 10-12 events at Southeast short tracks like Dillon Motor Speedway each season, where they can take their cars and put on some good-time racing.  Some of the cars are replicas, while others are painstakingly rebuilt racing machines that look and sound like they could still reach today’s racing speeds if their wives and track management would allow.

I was given the opportunity to sit in the passenger’s seat of the 1950 replica of what is purported to be the oldest NASCAR stock car still in existence – Paul Goldsmith’s 87 driven by Buck Baker.  The real car is in the museum at Darlington, but the replica does just fine I can assure you.

I was told that we hit 120mph, and I believe it.  We’ll have video on Steering Wheel Nation over the weekend, but I had an absolute blast. It was more than enough for this raceaholic to see how brave the racers of this car’s day were to muscle these machines around the track for three or four hours every weekend.

Darlington is its own throwback, and this group looked right at home there.  They weren’t the only ones on-track that day, as the lapping day saw many other cars of the non-racing variety pay $20 to take a few laps around the “track too tough to tame”.

There was even a hearse!  It may have been the first time in modern history that a bunch of people could laugh at the site of a hearse on pit road at a race track.  It was all in good fun, as STOCK CAR CLASSICS raised $1300 for the Humane Society of Darlington County (Danielle Lockemy is their Marketing Manager) and presented track president Kerry Tharp with the big check during a break in the action.

“I would like to thank all the SCC Members for coming out to Darlington,” Whiteside said. “We got the opportunity to make some laps on a historic oval and help the Humane Society at the same time.  When you combine fun with a worthy cause, everyone wins.  Special thanks as well to Kerry Tharp and Danielle Lockemy for allowing us to put these cars back on a track many have seen before.  Stay tuned for more exciting events to come!”

After multiple lapping sessions, the day ended with all of us being invited to tour the track’s museum, which was a real treat because there are lots of amazing cars, a case full of past “cheatin’ parts” and a whole lot more.  The museum is well worth the trip there just in itself.  I think the selection of cars is even more fun to look at than the ones in the NASCAR Hall of Fame in Charlotte.

We at Steering Wheel Nation will be partnering with this group in an effort to keep the history alive and help them to grow and have opportunities at regional tracks.  We’ll be sharing more content on our site and social media, and you’ll begin soon hearing from those involved through interviews and our shows.

If you like the golden age of NASCAR, this group is for you.  Just go to Facebook and search STOCK CAR CLASSICS and ask to join.  If you’re kind, family-friendly and know your NASCAR history, they might just let you in!