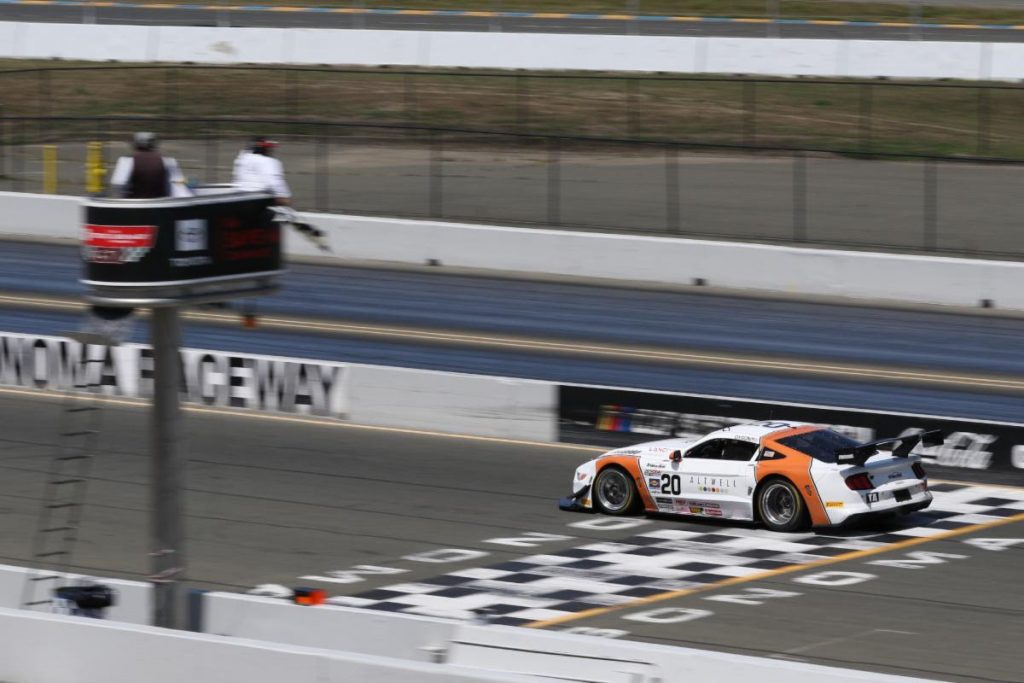 SONOMA, Calif.  — Chris Dyson had the perfect weekend in Round 5 of the Trans Am Series presented by Pirelli’s Mission Foods 100 at Sonoma Raceway, topping the practice charts, earning the Motul Pole Award and leading every lap on his way to the TA race victory at the California track. Dyson raced flawlessly, completing a West Coast sweep while hard battles were waged behind him.

After leading the weekend’s only TA practice session, Dyson’s No. 20 ALTWELL Ford Mustang captured the Motul Pole Award with a track-record breaking lap. When the green flag waved over the field, Dyson pulled ahead, keeping his lead throughout the caution-free event. Tomy Drissi ran hot on Dyson’s heels in his No. 8 Lucas Oil Ford Mustang, but he was unable to close to gap to pass the defending champion.

The race for third-place overall was a tight battle between Ken Thwaits in the No. 7 Franklin Road Camaro and Western Championship competitor Greg Pickett in the No. 6 ALTWELL Ford Mustang. The two battled tightly for the duration of the race, swapping positions, but Pickett held the advantage when the checkered flag waved, earning him the TA Western class win, as well. Thwaits’ fourth-place finish overall put him third on the podium for the National competitors.

Some of the most exciting battles of the day were in the SGT National and Western classes, with Cindi Lux winning in National with her No. 45 Black Rock Coffee Dodge Viper, and Chris Evans winning the Western race in his No. 92 Chris Evans Inc. Ford Mustang.

“That was a terrific end to the weekend, and a really great week for us out here in California,” said Dyson after pulling into Victory Lane. “Sonoma is one of my all-time favorite tracks, and we’re so blessed to be able to come out here and race on the West Coast with two tremendous races in a row. Coming out here and winning, finishing on the top step of the podium in the ALTWELL car with Greg Pickett and the Pickett family, I just couldn’t be happier. Tomy [Drissi] pushed me the whole way these last two weekends, he was always breathing down my neck. It was great competition. We look forward to these races, we prepare for them, and this has been a really special week. It’s been great for points, and it’s very satisfying to head into Lime Rock with the points lead.”

“Today’s race was fun,” said TA Western winner Pickett. “I’m so excited to win another West Coast race, especially in front of family, friends and my crew. I have to congratulate Chris Dyson. He’s my partner in ALTWELL, he just keeps getting better and better. He’s scary fast, and I’m so proud of him.”

“This was a good race, and it was a lot of fun,” said SGT National winner Lux. “You know, Sonoma’s pretty special, I got my first pro win here back in 1999. Thank you to everybody for coming out, we’ll keep working on these Dodge Vipers and get them out front this season.”

“We didn’t qualify as well as we wanted, but I followed Cindi [Lux] and Michael [LaPaglia] around, learned their lines and found out where I was slow,” said SGT Western winner Evans, who was also awarded the ChillOut Keep Cool Move of the Race. “They really coached me. We had to go to work, and we wound up having a great race.”

TA returns to the track May 27-30 with the Trans Am Memorial Day Classic at Lime Rock Park.